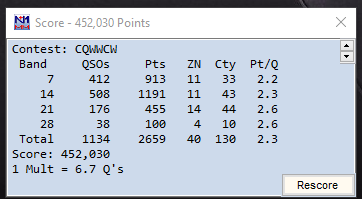 Another CW contest is in the books and this is the first time that Murphy stayed far away from me. I spent the longest time I ever have sitting in the contest chair, one reason could have been it was rainy and cold outside. I took one-hour sessions at a time with about a 10-minute break and lunch and dinner. I found this worked very well and allowed me to focus better when I was on the radio. I spent most of my time in running mode ( calling CQ contest and listening for callers) I will be honest there were times I did have issues and most likely ticked off some contesters with my failing to get their call, but oh well we all have to learn.

Some of my highlights were contacting a fellow blogger Bas PE4BAS on 2 different bands.

With calling CQ or running I found the time just flew past and before I knew it I was coming up on my 1-hour break mark. Having said that at times when someone spots you on the cluster (thanks Bas) it can get jam-packed. At one point I answered and logged 136 QSO's in 1 hour! My theory is, keep my CW speed at a moderate level (around 29-27 WPM) and I figure I may get more callers. I could go faster but I feel I limit my prospects. Having said that while going at 29wpm I did get over and over stations coming back to me at 32-39 wpm, could be those I have worked in my weekly CWops mini contest and know the speed can be picked up a notch. But it does throw you off to all of a sudden get a call out of the blue at 36 wpm.

It was nice to see 10m open and I was able to make some DX contacts. On Sunday afternoon 15m opened to South America and Hawaii which allowed me to get some nice multiplier contacts.
I was very happy with how the new Hustler 4BTV performed as this was the first major contest I was able to use it in. My dream goal was to double last year's score and I went way beyond that!

As a side note: This morning was the weekly Monday running of the ICWC MST (medium speed 1-hour contest) I gave the morning session a go and what a DISASTER it was! Not sure if there is such a thing as day after major CW contest brain fog but I sure did have it. A half-hour into the hour session I was ready to pull the plug but I hung on and ate humble pie. I was hearing the correct call but typing differently, hearing letters that just were not there, logging a contact before I received their full exchange and as a call was being sent to me I was like a deer in headlights. I could not send or receive S.O.S. if my life depended on it.  Oh well, water under the bridge and just for the heck of it I am going to jump back in the operating chair for the afternoon MST session. What could go wrong eh?

at 11:33:00 AM
Email ThisBlogThis!Share to TwitterShare to FacebookShare to Pinterest
Labels: Contesting, CW contesting

Nice write-up - I enjoy reading reports like this and that you enjoyed the contest. I didn't participate this year as we were on the road for the holiday. I did activate two parks (only one of which was during CQWW) but did not log your call from either of them. There are at least two CW contesters with callsigns very similar to mine. I'm curious what day and time you logged my call - I'll check to see if I was at the POTA site then.

Excellent review Mike. Yes, I thought you were not too busy so I spotted you after our contacts. I'm sure it helped, I have the same experience and am always happy when someone is spotting me. You did a great job this contest with over 1000 QSOs. I guess you will end high in the ranks. Great to work you. Hope to meet you again, 73, Bas

Good evening John, I must be getting old and I was relying on my memory. I do remember a call that was close to yours and just figured it was you. Blog has been corrected. Having said that I did have a blast in the contest and was very happy with the results.
73,
Mike
VE9KK

Good evening Bas, thanks very much for the spot and I am always happy when that happens. I check DX Heat to see if I have been spotted once there is a drastic uptick in calls and mini pile-ups. I was very shocked with the end results and very happy.
I am very sure our CW paths will meet again soon.
73 and have a good week,
Mike
VE9KK

Bill very nice to hear from you, yes I must be honest and say I am very much surprised myself.
73,
Mike
VE9KK

VE9KK
I've been a ham radio operator since 1989 my interests in ham radio vary from contesting, low power operation (known as QRP) and building Elecraft radios. I have built the Elecraft KX1, K2 and the KX3. Other kits include the LP-Pan, LP-100,4SQRPometer..and the list goes on. I am now the proud owner of an Icom 7610. I have retired and moved to the Maritime East coast of Canada. I have moved on from the kit building as being on a fixed income I have to pick and choose. I have taken more of a shine to CW contesting and have continued to improve on my CW skills. I hope you enjoy your stop at my blog and find it informative. Feel free to leave a comment! 73(72) Mike